The building of Vadász utca 29 was designed by the architect Lajos Kozma in the 30s of the last century as a business center for the Weiss family, dealer of glassware products for building construction. The Hungarian legislation banned the Jewish owner from exercising his profession. The Swiss Embassy’s Emigration Department for Representing Foreign Interest opened in the desolated building July 24, 1944.

In 2005 the Carl Lutz Foundation established a Memorial Room in the former garage of the building.

The Budapest based Carl Lutz Foundation was established together with a Memorial Room in order to preserve this unique example of honor, courage and inventive humanism for the generations to come.

Unruffled and fearless the Swiss diplomatic officer, Carl Lutz was negotiating with the Hungarian government. He gave room for the staff of the officially terminated Palestine Office as well as for leading officials of the Glass House, who were, on a constant basis, issuing new emigration lists. The Zionist youth utilized the official cover to distribute real and fake documents and helped people escape.

After Oct. 15, 1944, when the Hungarian Arrow Smith Party came into power, the Glass House was the only fragile island of some relative safety during the raging terror for the persecuted in Budapest. Life was extremely tight in the Glass House: people were living for weeks or even for months in a cellar corner or in a garret nook with a lot of ingenuity and with boundless hope. Misery and desperation brought about loathsome rows herein, while young people had heated debates over their future after the war. Fury slipped away though, dreams were only partially realized when more than two thousand people were liberated in the Glass House January 18, 1945.

The Foundation collects, systematizes – and if possible, publishes publications – the story of the Glass House and the Swiss salvage operation as well as the list of people, who found asylum in this building. We received lots of support till date to complement the available documents. Often descendants, relatives or friends of the Holocaust survivors continue to remember. Please, support us with potential information and/or remained documents (or their digitalized or copied versions) to help preserve the stories. 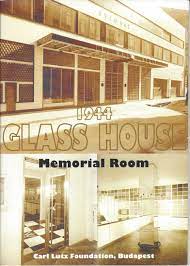