The Centre is not the first academic institution in Poland which has taken up the topic of the Holocaust. It continues the work of the small Research Group for Holocaust Studies established in 1996 at the Centre for European Studies of the Jagiellonian University (currently the Institute of European Studies) by Professor Zdzisław Mach. While there are other academic centres in Poland which carry out research on the Holocaust, the Centre for Holocaust Studies is the first university level body whose sole purpose is to conduct research into the Holocaust, to educate about it and to commemorate it.

Why was the Centre for Holocaust Studies established at the Jagiellonian University? “Because the Holocaust is a part of modern history just like the history of Fascism, it is a part of European tradition that we must come to terms with and understand (…). We live in a world in which many unjust events have taken place. The university is a place where the truth must be researched in order for it to be passed on and remembered. This is why we must research even the most painful, darkest and sinister fragments of history – in order to pass on the knowledge we have obtained to young people and to remember” – said Professor Karol Musioł, the Rector of the Jagiellonian University, during the inauguration of the Centre. In the opinion of Professor Wiesław Kozub-Ciembroniewicz, Chair of the Centre for Holocaust Studies Academic Council, research on the Holocaust is the duty of the university. The extermination of the Jews is thus a part of the history of Krakow, and a part of the history of Europe as a whole.

The Centre for Holocaust Studies cooperates with both national and international institutions of similar character and objectives, such as the International Center for Education about Auschwitz and the Holocaust at the State Museum Auschwitz-Birkenau, Pedagogical University of Cracow, House of the Wannsee Conference Memorial and Educational Site, Centropa, USHMM, Foundation for the Preservation of Jewish Heritage in Poland, Jewish Historical Institute, Jewish Community Centre of Krakow, Austeria Publications, as well as with many other institutions, museums, memorial sites, publishers and academic journals. 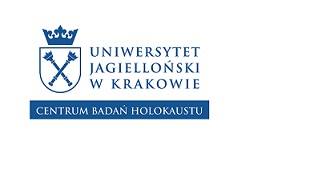