Islamophobia, or hatred of Muslims, has only recently become widely recognised. However, this phenomenon has existed since the beginning of Islam as a hostility that surfaced in literature, poetry, the visual arts, church sermons, poetry and in military campaigns. The recent recognition and identification of islamophobia means that comparatively little data is available on it (in contrast to antisemitism which has been well-documented for centuries). It is difficult therefore to measure any changes in anti-Muslim or islamophobic discrimination or attacks over time. However, there can be no denying that the position of Muslims in European societies is under extreme pressure due to inflammatory discourse. Moreover, public opinion is often fed with generalised and prejudicial messages about Islam and its followers. (1)

Islamophobic attitudes and policies will continue to escalate if not addressed through constructive educational mechanisms. Positive intercultural relations can only be assured by confronting prejudice and discrimination, understanding cultures, respecting individual and collective rights, and facilitating constructive dialogue on shared norms and issues.

Islamophobia is not just a problem for Muslims themselves. On the contrary, prejudice, discrimination and hatred have to be – and always will be – a concern for all in society.

The objectives of the ‘Overcoming Islamophobia’ training programme are to 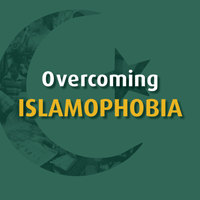