Initiated by the European Association for the Preservation and Promotion of Jewish Culture and Heritage (AEPJ), Parallel Traces is a cross-cutting, collaborative, pan-European project that offers a renewed look at the significance of Jewish heritage today. By unearthing the traces of the Jewish cultural heritage in urban architecture and planning in Europe, it offers an original and rigorous perspective on the past, present and future of European Jewish history and encourages mutual understanding and respect amongst different cultures and modes of artistic expression.
More specifically the project activity will be centred around three main threads:

Development of an app “Parallel Traces” that will make available information on local Jewish Heritage to the general public;
Organisation of a large pan-European contest in order to select a series of artworks presenting the reality of Jewish heritage;
Hosting of local exhibitions presenting the selected works of the contest.
To achieve the aforementioned, the project will rely on different mechanisms of building on existing localized knowledge of Jewish Heritage sites, engaging with existing artistic networks and local communities, facilitation of the creation of new digital artwork and representations of Heritage in a contemporary context.

Parallel Traces is co-funded by the European Union within the framework of the Creative Europe programme. 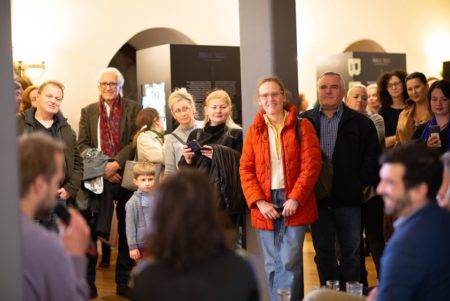