Three to four right-wing, racist or anti-Semitic acts of violence are committed in Germany every day. The counseling institutions, which are part of the umbrella organization of independent counseling centers for those affected by right-wing, racist and anti-Semitic violence (VBRG), ensure that those attacked and injured do not remain alone. They advise and support those directly affected as well as witnesses and relatives: free of charge, confidentially, on site, partisan in the interests of those affected and anonymously if desired.

The VBRG works to ensure that those affected by right-wing violence have nationwide access to professional, independent, free advice and support institutions that work in their favor. Currently, 14 independent advice centers for victims of right-wing, racist and anti-Semitic violence from 12 federal states are combined in the VBRG eV. Every year the member organizations advise and support hundreds of victims of right-wing violence with many years of experience and great expertise. They support those directly affected by attacks, threats, arson attacks and assaults as well as their relatives, close relatives and witnesses: free of charge, confidential, on site, partisan in the interests of those affected and anonymously if desired. 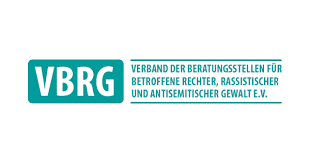