Every year, co-sponsored by the Croatian government and the Catholic Chruch of Croatia, between 15.000-30.000 people gather in Bleiburg / Pliberk, a town at the border between Austria and Slovenia, to hold a vigil remembering the “Victims of Bleiburg.”

At the meeting, the Croatian NDH-State is remembered. The NDH-State was a Nazi vassal sate lead by the fascist Ustaša and its leader, Ante Pavelic. The NDH-State run the Jasenovac Concentration Camp, the only Concertation Camp in WWII, where people were systematically murdered without any direct German involvement. Around 100.000 Jews, Roma, Antifascists, and Serbs were murdered in Jasenovac.

This year, the large gathering in Bleiburg / Pliberk was impossible due to Corona-Virus restrictions, but Jewish Students mobilized against two replacement events:

In Austria, EUJS, together with the Austrian Union of Jewish Students (JöH), co-organized a counter-demonstration (planned since December, before the large meeting had to be canceled). In anticipation of the protests, the Croatian Ambassador to Austria had to lay his wreath at 7.15 in the morning, instead of at 10, like initially planned. An organized commemoration was thus made impossible by the demonstration!

In Sarajevo, where a large “Bleiburg-Mass” was held, the Bosnian Union of Jewish Students co-mobilized to a demonstration that was attended by thousands of anti-fascists, taking a strong stand against historical revisionism. 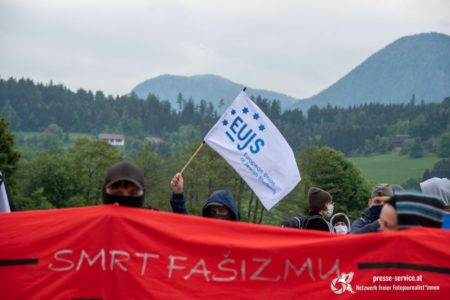