The community was founded in the late nineteenth century. The first synagogue in Esch-sur-Alzette was completed in 1899, and for forty years the community flourished. Unfortunately the synagogue was destroyed during the Second World War. Today, its remnants can be seen in Place de la Synagogue, just up the street from our current building. Throughout Occupied Europe, many members of our community were deported and killed by the Nazis, their names are recorded on a monument erected on the site of the old synagogue.

In 1954, the current synagogue was constructed on Rue du Canal. Its structure recalls its predecessor, and its stained-glass windows are a striking feature of its design, especially in sunlight. Since the war the community has been led by several ministers, the last of whom, Victor Portal, retired in 2008. That same year the community, led by its pioneering President, Robi Wolf, decided to take on a new direction. They appointed a liberal rabbi from England, Nathan Alfred, and began to create an open and inclusive community for Jews throughout Luxembourg and its environs. 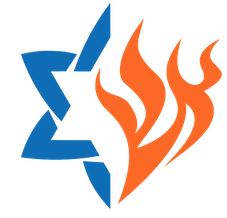