Memorial to the victims of the Shoah from the Czech lands

The Pinkas Memorial is dedicated to the Jewish victims of the Holocaust from the Czech lands. Their names are inscribed on the interior walls of the synagogue.

The names are placed in groups according to the victim’s last place of residence prior to their arrest or deportation and are listed in alphabetical order. The names of victims from Prague are inscribed on the walls of the main nave; the names of victims from other towns and communities in Bohemia, Moravia  and Silesia are inscribed on the other walls of the synagogue.

The text of the inscriptions was compiled from card indexes that were drawn up shortly after the war on the basis of extant transport papers, registration lists and survivor accounts. The inscriptions include the names of the victims along with their dates of birth and death. As the exact date of death is usually not known, it is replaced by the date of deportation to the ghettos and extermination camps – this is usually the last known information about the victims.

The sides of the Holy Ark (aron ha-kodesh) are inscribed with the names of ghettoes and death camps where Bohemian and Moravian Jews were transported and where most of them were exterminated.

A digital version of the exhibition is available via an interactive kiosk inside the synagogue and a web interface.

One of the oldest memorials of its kind in Europe

The memorial was closed in 1968 after the Soviet invasion of Czechoslovakia. It was not until 20 years later that the building was reconstructed. After the collapse of the Communist regime, work could begin on the renovation of the memorial, which reopened in 1996. 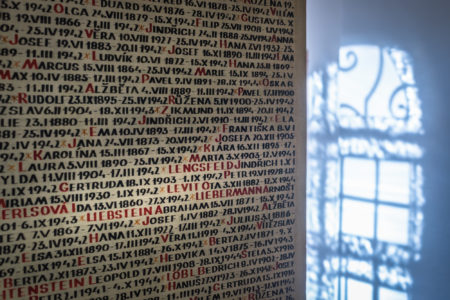