National Memorial to the Jewish Martyrs of Belgium

Commemorative monument designed in 1964 by architect André Godart, in collaboration with architect Odon Dupire and consulting engineers A. Lipski and Jacques Lewin, and erected from 1968 to 1970. Located in the center of the Square of the Jewish Martyrs, created for the occasion, the memorial was inaugurated on 19.04.1970.

The erection of the monument is the result of a competition launched in 1964 by the Union of Jewish Deportees of Belgium. The choice of Cureghem for the establishment of this national monument is explained by the historical presence of a large Jewish community in the district, as well as by the existence of an active resistance in the commune during the Second World War. A second memorial, designed in 1978 by the same André Godart, was added on the southwest face of the monument, in tribute to the Jews of Belgium who fell in the Resistance to the Nazi occupier. Classified as a monument on 23.10.2003, the complex was restored in 2012-2013 by the architecture firm Origin.

In 1972, two national commissions were created to design a monument to the Jewish Resistance and a tribute to the Righteous Among the Nations (non-Jews who risked their lives to help the Jews).

The Monument to the Jewish Resistance presents the names of 245 Jewish heroes of Belgium who fell in the resistance to the Nazi occupier, it was inaugurated on May 6, 1979. The Memorial was classified in 2003. The Wall of the Righteous will be built as part of the future redevelopment project of the Albert Block led by Beliris in 2021.

On the initiative of the Yom HaShoah Committee, bringing together representatives of the Central Israelite Consistory of Belgium, the Coordinating Committee of Jewish Organizations of Belgium, the Foundation of Judaism in Belgium, the Forum of Jewish Organizations, the Union of Jewish Deportees in Belgium – Daughters and sons of the Deportation, the Hidden Child and Continuity of the Union of Former Jewish Resistance fighters of Belgium, the Citizenship Education Center of the Center Communautaire Laïc Juif David Susskind coordinated from January to April 2020 the MEMORIAL 50 event dedicated to the 50th anniversary of the National Memorial to the Jewish Martyrs of Belgium (Anderlecht). 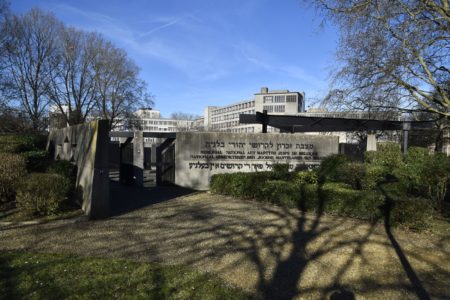