Say No to Antisemitism

Under the leadership of club owner Roman Abramovich, Chelsea FC has been working with partners to create a program to tackle antisemitism in a way that has a deep and meaningful impact. The Say No to Antisemitism project is now setting the standard for combating discrimination, not just at Stamford Bridge, but also in our wider communities.

The partners include the World Jewish Congress, the Community Security Trust, the Holocaust Educational Trust, Kick It Out, Jewish Museum London, Maccabi GB, Anne Frank House, the Office of the Chief Rabbi, the Board of Deputies of British Jews, the Anti-Defamation League and the Jewish Leadership Council.
The launch of the campaign took place at Chelsea’s match against Bournemouth on 31 January 2018, four days after Holocaust Memorial Day, and saw a wide range of activities taking place in and around Stamford Bridge. Fans were handed specially designed phone wallets encouraging them to report any discrimination they witnessed, while a giant Say No to Antisemitism banner was unfurled on the pitch. In the Directors’ Box, the Chief Rabbi Ephraim Mirvis presided over a candle-lighting ceremony and was joined by special guests, including Holocaust survivor Harry Spiro and leaders from the Jewish community. 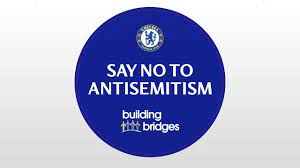