The Warsaw Ghetto Uprising Campaign is an educational and commemorative event, an initiative of POLIN Museum, which takes place every year on April 19, the anniversary of the outbreak of the Warsaw Ghetto Uprising. For almost a decade, hundreds of volunteers in Warsaw and other cities around the world have been handing out paper daffodils to raise awareness of the Uprising and its significance. Those who cannot be in Warsaw to receive the daffodil, or pay respects to the heroes of the uprising. The campaign is available online, and people from around the world use the hashtag, #WarsawGhettoUprising, and post selfies wearing the daffodil. The campaign seeks to not only bring awareness to the event of the Warsaw Ghetto Uprising, but also to take a stand against anti-Semitism. 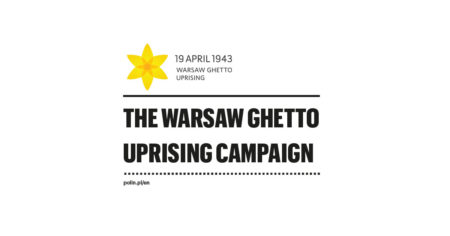